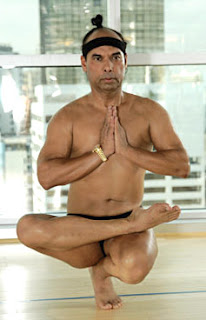 When I first came to Ottawa and wanted to go to yoga classes, I wanted something predictable. I didn't want to hear a new yoga teacher's spiritual take on life or try fancy poses, I wanted something comfortable and known. So I went to Bikram Yoga, as I had learned it back when I lived at Kripalu when Bikram himself came all the way from California to teach us. It helped that the classes in Ottawa were often taught by my old ashram brother, Luc.

Lately I've had some tightness in my shoulder and wrist and I've adjusted my downward dogs and been careful on my hands and knees and I even talked to my trainer about it. "Jamine, you're getting old." Well, that did it. I walked straight into a Bikram class and went to work. My shoulder and wrist are about 90% better after 3 classes last week. That series is so therapeutic and if it doesn't kill you, it will definitely make you feel better.

As for the heat, the medication I'm on is giving me hot flashes, so I'm already there and it doesn't seem to make them worse. I would figure it's actually balancing me except that the stuff I'm on is intentionally unbalancing me so I don't want to mess with that too much. I'm preparing mentally to have surgery in just less than a month and it's probably not a bad idea to prepare physically while I'm at it. I don't want to be stuck with a sore shoulder and unable to move around, so I'll fix it now and hopefully it won't be bothering me afterwards.
Posted by Unknown at 11/14/2011 09:57:00 AM

I've never tried Bikram - I'm always concerned about hot yogas and how much I can take! Good to know that it helped with your shoulders/wrists - I would imagine the heat would help!

Bikram Yoga isn't for everyone in my opinion. But for lots of people it's a great challenge and it's a good workout. Give it a try and let me know what you think!

To have Jamine come to your workplace to talk about Work-Life Balance, or Stress Reduction and Resilience Strategies, please get in touch. Customized packages available.

Private mentorship or coaching is available for yoga teachers or others who would like coaching on their small business from a yoga teacher's perspective. Program is comprised of 4-5 work sessions, 4-5 check-in calls and other visits as needed.
Please get in touch to set up an appointment with Jamine.

No more open public classes for now!
Check out Living Yoga at www.makatayoga.com where I'll be teaching regular workshops.
If you'd like me to come to your workplace or arrange for a small group session, just let me know.

Yoga Apps for iPhone and iPad

Now you can buy my DVD, Jamine's Beginning Yoga Class, online through PayPal. When you click on the button it will take you to PayPal - the price is $20 + $3.50 shipping.
The DVD is not new - it's the one I did a few years ago - my basic beginning yoga class. You can flip through sections including 3-Part Breath, Warm Ups, Sun Salutations, Standing Poses, Seated Poses, and a Relaxation.

Join Jamine as she makes her way through her life's journey. Please forgive her if she stumbles through areas you would expect a yoga teacher to have handled already with grace and ease.

These are the "do's and don'ts" of yoga... Basically... Yamas :: Don't do these things :: ahimsa - don't hurt people satya - don't lie asteya - don't steal stuff brahmacharya - don't get intoxicated aparigraha - don't be greedy Niyamas :: Do these things :: saucha - clean up after yourself santosha - be content tapas - be into what you're doing swadhyaya - know yourself ishwara pranidhana - surrender to what is